lephants are unquestionably gentle giants in the animal realm. Did you know they’re also quite intelligent and can be taught?

In this video, the following elephant invented her own show-stopping, heart-melting act. Faa Mai is a Thai elephant who lives in Elephant Nature Park. 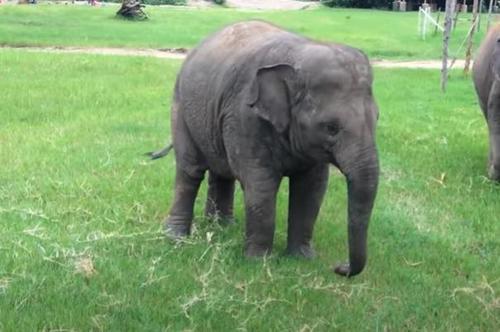 Elephant Environmental Park is a Thai nature preserve. This place is surrounded by beautiful foliage and offers a relaxing atmosphere. It’s a location that can provide elephants with the kind of habitat they require to thrive.

This elephant field is surrounded by several shelters. The elephants are contained by fencing with huge posts. The grey giants are surrounded by plenty of fresh, green grass.

It appeared to be a typical day from the outside. A preserve worker strolled through the field with a rucksack at one point. The elephants did not deviate from their usual routine and appeared to be at ease with the man. 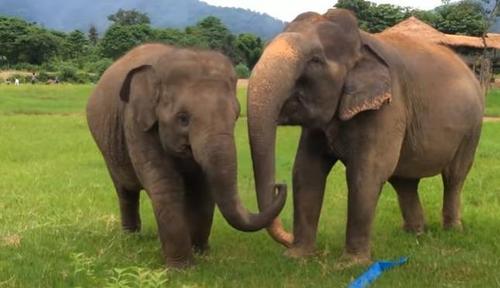 Faa Mai is a juvenile elephant in the Elephant Nature Park in Thailand. She enjoys socializing with other elephants and playing with them. In fact, an older elephant, who could be a relative, walks up to check on her. Faa Mai made an exciting discovery while playing in the field. It was large, blue, and appeared to the precious pachyderm to be a lot of fun. She had so much fun with it that she continued to play with it until she had taught herself a variety of new tricks.  The juvenile elephant most likely looped the huge blue ribbon around her trunk when she initially took it up. A video showing her winding a short ribbon length around her trunk during a play session was captured on tape. She’d then launch it into the air.

A Creature with Blue Ribbons 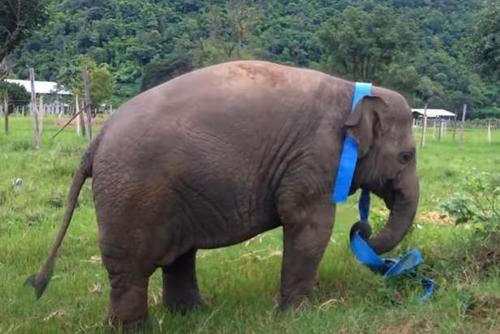 Faa Mai is shown enthusiastically walking through the field while wearing the ribbon. It was as if she were flaunting a blue ribbon she’d won at a state fair or some other competition. She raised her head high during the parade, as if she had received a blue ribbon. The trunk of an elephant is useful for a variety of tasks, including drinking and communicating.

Elephants use their trunks for a variety of functions, including breathing, sniffing, and reaching for food. A trunk can be utilized for amusement, such as grabbing other elephants or new toys. Faa Mai, on the other hand, grabbed the ribbon and swirled it around. This action wrapped the ribbon around her trunk. It was as if she was encasing herself in an adorably cute wrapper. 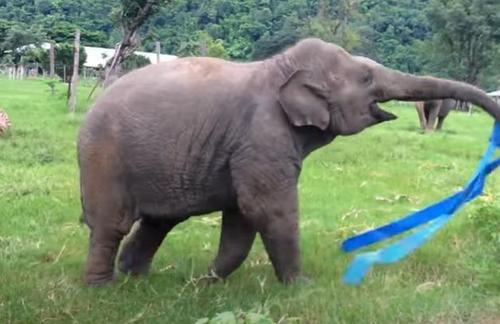 The small pachyderm did more than wrap the ribbon around her trunk once it was in her mouth. She swung it back and forth a lot. One of her favorite actions was to move it in a wave motion to create an ocean of fun. This creative elephant devised yet another trick, as if wrapping her trunk or producing waves wasn’t enough fun. She slid the ribbon from one side to the other. Rather than waves, this motion produced little serpentine curves.

Faa Mai did more than only do these maneuvers by herself. She placed them all together and performed them one after the other. She resembled a ribbon gymnast as she whirled her ribbon around. A cheerleader is required for anyone who competes in a sport such as gymnastics. Elephants are no different. One of the elder elephants came alongside Faa Mai to support her after the young gymnast dropped her ribbon on the ground.

A Word of Encouragement 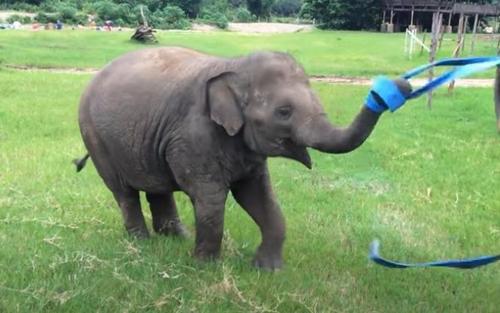 Faa Mai’s elderly companion momentarily joined the young gymnast in trunks. They repeated the process a second time. Faa Mai regained the strength to take up her ribbon and perform her act after this sweet embrace.   Faa Mai flees to an area with a little shrub after executing more twirls and swirls. She hits the plant with her ribbon. After her long play session, she bends down and has a modest snack.