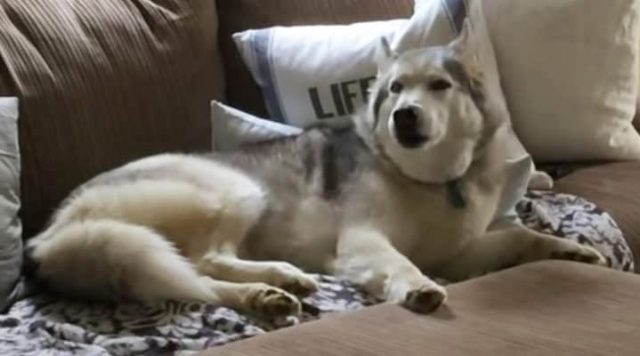 has probably often happened to all of us- that feeling of being lazy to even breathe. Getting off the couch is a chore, let alone taking a shower or even attempting to go to the gym. It so seems that humans aren’t alone when it comes to feeling lazy. This dog shares a mutual pain.

Sure, for most of us, we need our dogs to motivate us to go for a walk because otherwise we won’t move an inch from the couch. Things are a little tough however, if we were to own a lazy dog, like the owner of this video. I’m sure you are familiar and have probably often used an expression along the lines of  I’ll start on Monday. Well, this dog is the epitome of that saying!

For most of dogs, hearing the saying let’s go for a walk will enthusiastically bring them on their feet- ready to go! Not this husky however. As his mom jingles the leash and tells him to go for a walk, the husky starts howling louder and louder in disagreement.

Zeus (the husky) has 0 intention of moving from that couch! Every time his human mother tells him to go for a walk, he starts arguing convincingly and cuts her sentences mid-way through constant howls. Perhaps the dog just wants to sit and watch TV all day long just like most of his human counterparts.

Huskies are either way famous for their tantrums and Zeus is no exception. He’s vocally voicing out his concern to his mom and wants his way all the way! No compromise.