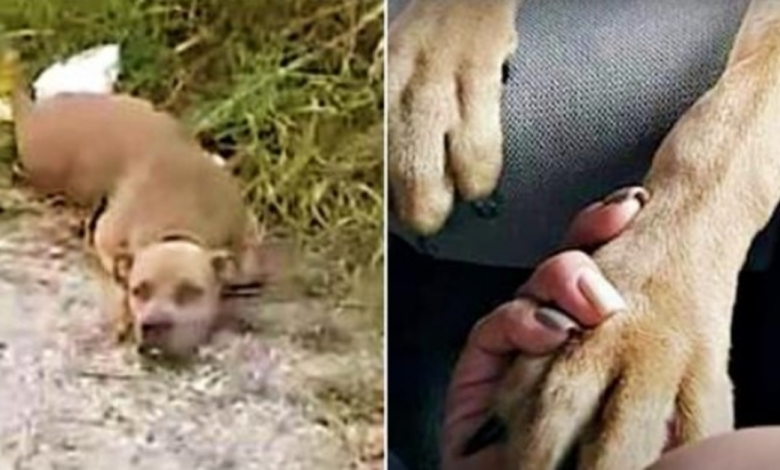 hen an animal rescuer named Judy saw a dog on the side of the road, she of course stopped her vehicle immediately, writes invazenanimals

The busy road must’ve had countless cars pass this poor pup and not a soul stopped to help her. And it was beyond obvious that this Pit Bull was hurt.  Judy got out of her car and tried to call the dog over to her but the pup couldn’t move. She was in a lot of pain. Judy came closer and the sweet dog used the last of her energy to roll onto her back and give tail wags. This was her way of saying, “I’m a nice dog and I will not hurt you. Can you help me now?” 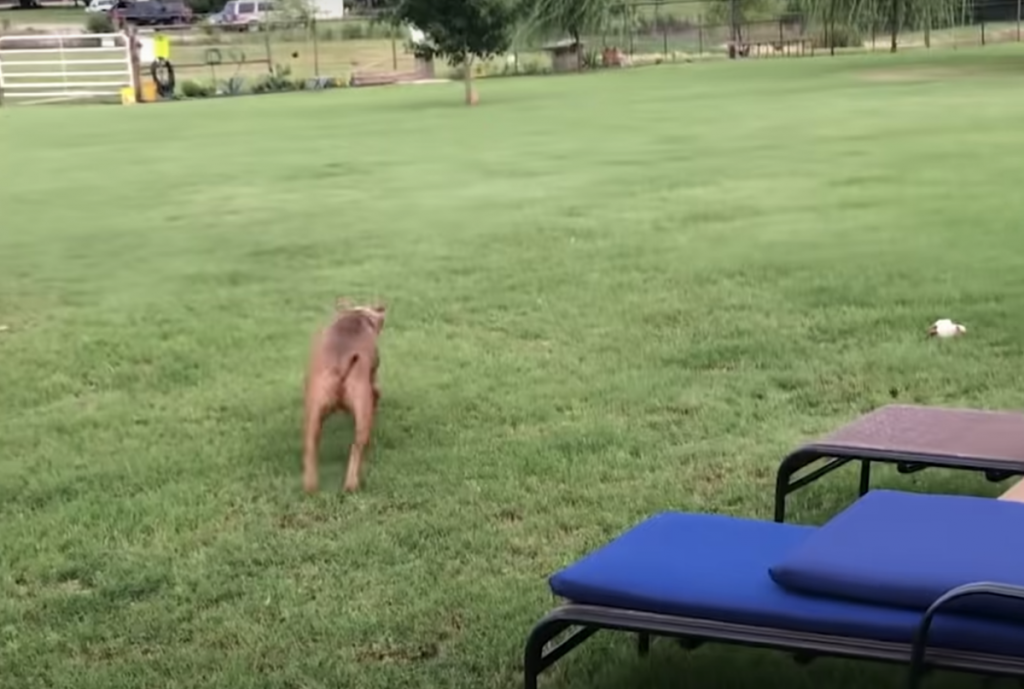 With some determination, Judy was able to get the Pittie into her car. The pup looked withdrawn and exhausted. Judy reached out her hand and the dog put her paw into it. They drove that way the entire 20 minutes to the vet clinic. Paw in hand, as if the duo was officially fighting together for this dog to get the help she needed. 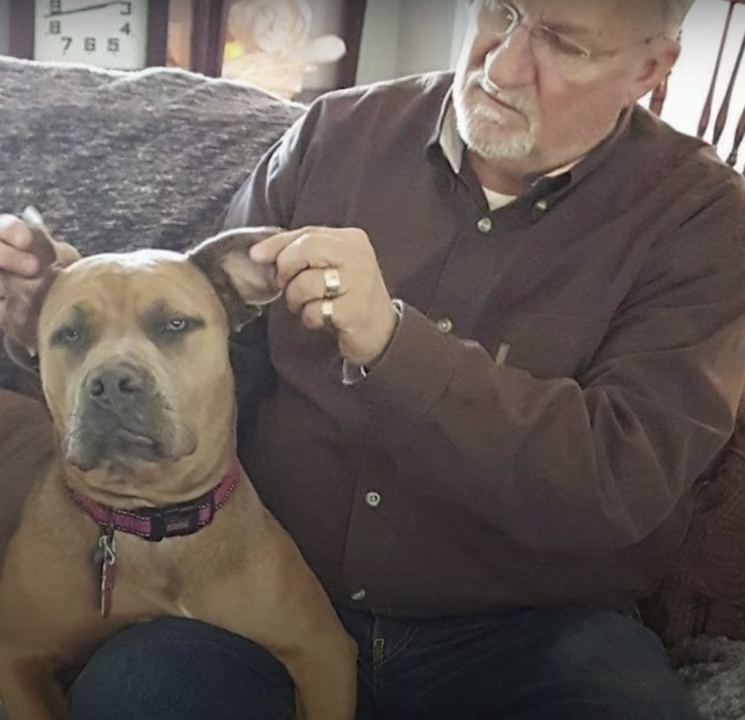 Judy had assumed that the Pittie was hit by a car but the vet confirmed this wasn’t so. She had old fractures which were quite telling. Someone had hurt this poor dog and then dumped her on the side of the road as if she was rubbish. Judy wanted to give the dog a fitting name… Mercy.

Mercy began to recover slowly. She was thankfully interested in food and Judy fed her from the palm of her hand. Judy wanted to make sure that Mercy was comfortable in her kennel at the clinic. She gave her a pink plush bunny and Mercy got quite attached to her new toy. 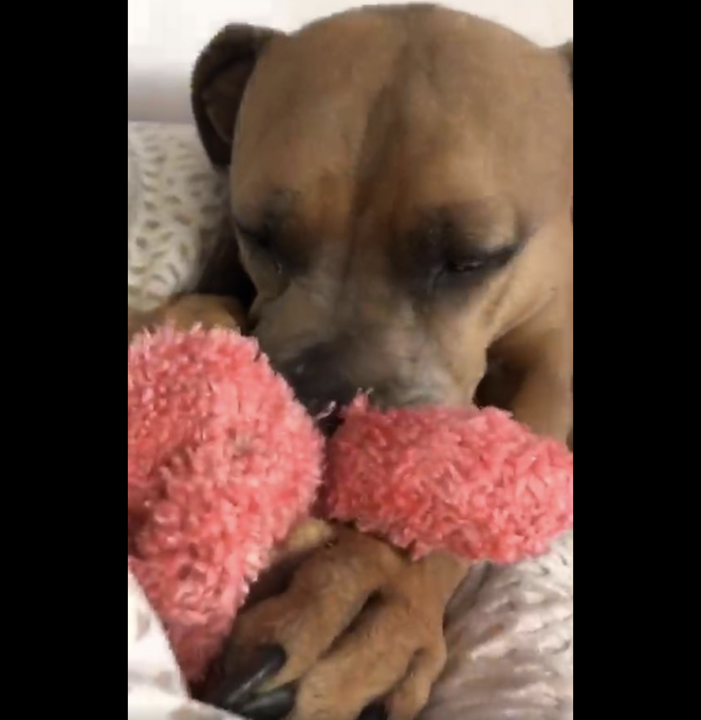 The rescue group provided a wheelchair for Mercy but she didn’t like it one bit. In fact, it motivated her to walk on her own the next day! Of course she struggled but Mercy showed she was willing to do all she could to recover.

While Mercy continued to heal, her story was shared on Facebook. Mark and Sharon saw Mercy’s photos and knew that this pup belonged with them. They reached out to Judy and told them they had a loving home waiting for her with a big yard. Judy knew that this family was Mercy’s destiny. When it was time for Mercy to go home, it was such a celebration. She met her new parents with her eager wagging tail and her favorite bunny in her mouth. Sharon explains in the video below that her bunny, “her baby,” goes everywhere with her. It’s the cutest thing ever.

A few months later, Judy went to visit Mercy. Mark couldn’t wait to show Judy what Mercy can do now. They went into the spacious yard and Mark threw Mercy’s tennis ball with a slinger. The ball went far and Mercy chased after it– running at full tilt– as if nothing had happened to her at all. It was incredible. The dog that couldn’t even stand up was now fully recovered. 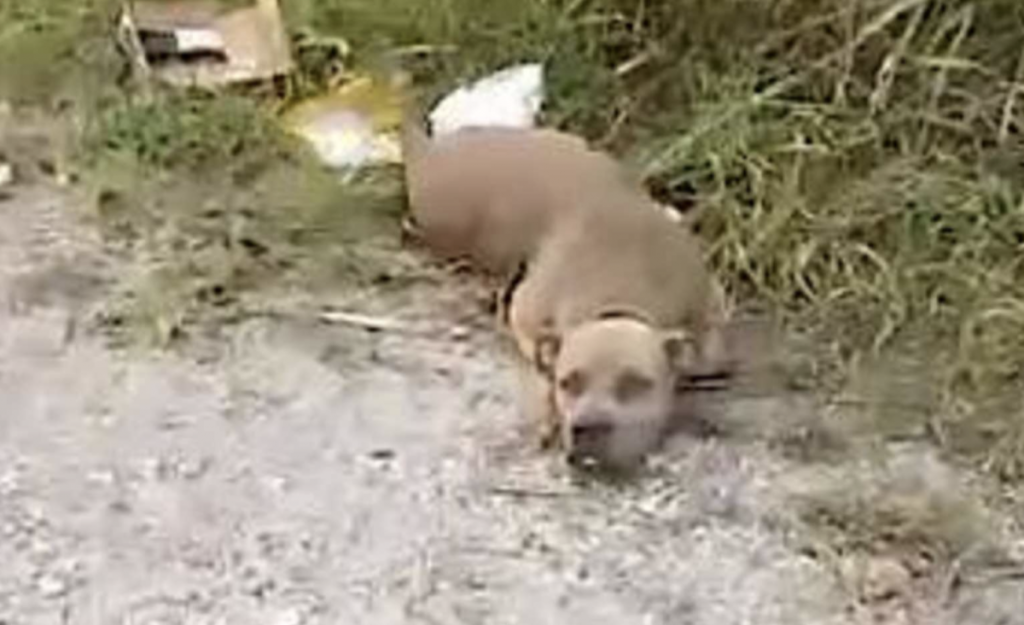 Mercy’s story couldn’t have ended happier. Thank you so much to Judy and TAO Animal Rescue, the medical staff, and to Mercy’s new parents for giving her the life she deserves. To see Mercy’s full story by The Dodo, scroll on down.