Gilbert Grape was on death row at a high-kill shelter because “he was carrying a tumor larger than imaginable, something so gargantuan that it’s heart-breaking to see.” But his rescuers weren’t about to leave him there…

This heartwarming survival tale of a Weimaraner who survived not only a life-threatening tumor but also a high-kill shelter thanks to a group of caring rescuers eager to save him comes from the DogHeirs.com archives.

Tickled Pink Weimaraner Rescue responded quickly to a call about a Weimaraner on death row at a high-kill shelter. When they arrived, though, they were astounded to see a dog with a monstrous tumor on his underbelly that the dog could barely stand.Gilbert Grape was his given name. How he survived for as long as he did, and how anyone may have ignored his medical needs for so long, remains a mystery. 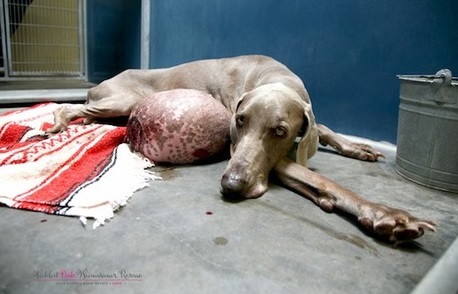 Gilbert Grape’s rescue story was shared with DogHeirs by Keri Pink, a Media Relations volunteer at Tickled Pink Weimaraner Rescue (TPWR). She describes how the stray was rescued and how he is on his way to recovery.“The shelter’s policy for strays is to keep the animal without vetting for 72 hours to enable an owner to reclaim, although the county has a program where they will allow pre-approved, federally recognized rescues to take animals in under a medical clearance.” 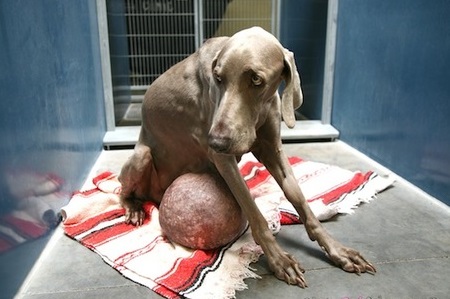 “Two devoted shelter volunteers alerted Tickled Pink Weimaraner Rescue, and we swooped in to assist.”“We called him Gilbert Grape after the monstrous grape-shaped tumor that protruded from his chest. As a result, Gilbert Grape was immediately transported to a 24-hour specialty vet hospital, where it was determined that he needed blood transfusions and intravenous catheter stabilization if their surgeon could attempt a life-saving operation to remove the tumor.” 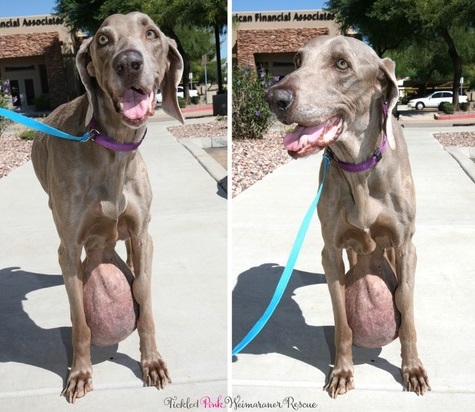 The cost of diagnostics, stabilization, and surgery was estimated to be about $7,000. Attempting to save the dog’s life was a fast and decisive decision made by rescue volunteers and veterinary staff.However, in rescue, there is a fine line between what a private citizen would be willing to do in order to provide life-saving care for their animal and what a dog only entering rescue would and should be subjected to. Private owners make decisions about their pets at their own discretion, while rescues depend on public support.”

“Gilbert’s health history and real age were unclear, but his blood test was relatively normal (with the exception of a high white blood cell count from the contaminated tumor); his approximate age was about seven.”“Tickled Pink Weimaraner Rescue saw a light in Gilbert’s eyes and decided to give him a chance, but we knew we’d need public funding.” “As a result, we met with a number of veterinarians and surgeons in order to make the best choice for the dog and his future. We launched a fundraiser, explained the situation to our Facebook followers, and financial donations began to flood in.”

“Gilbert breezed through surgery and recovered without incident in the intensive care unit. He was discharged from the hospital two days later for placement in a qualified foster home, where he has thrived ever since.” “A week after Gilbert’s surgery, the pathology report on his 12-pound tumor revealed that it was nothing more than a benign lipoma. Gilbert has been declared cancer-free.”

“He is ataxic throughout his back legs and has very little muscle mass throughout.” His center of gravity is off, and he walks shakily.” 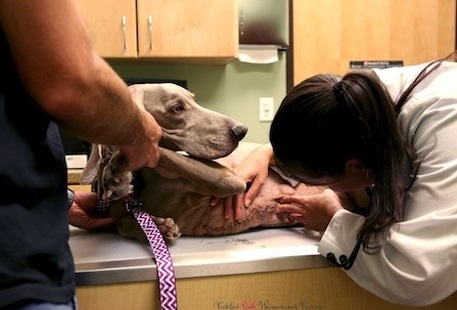 “Gilbert will soon begin a physical therapy program that will include manipulations, massages, and water therapy. Although he is still physically frail, his soft, silly personality is becoming more available to his foster father with each passing day.” Gilbert had been adopted and was living in a “incredibly caring and dedicated family” a year after his rescue. Despite having hip dysplasia, his family has a pool where he can swim for routine water therapy, and he is “getting along wonderfully” with his new family. 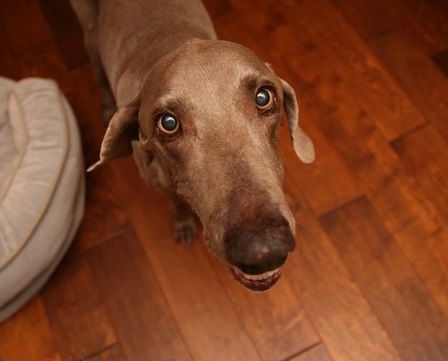