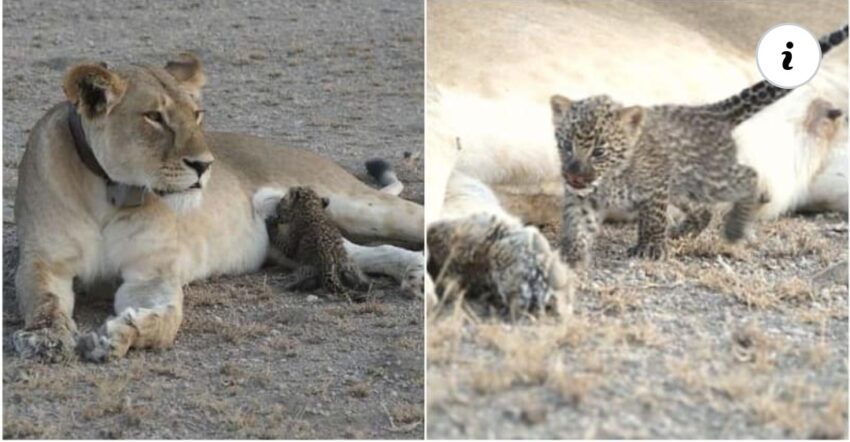 In the world of the big cats, the outsiders are rivals. They will definitely eliminate any cubs of other species and even of other packs, as they may directly compete for foods in the future. That’s why when a lioness adopts and nurses a leopard cub, it is totally mind-blowing.

This strange behavior was witnessed and photographed in Tanzania’s Ngorongoro conservation area. The mother lion found the cub abandoned near her den and unexpectedly adopted it.

The lioness was Nosikitok. She was collared and monitored by KopeLion, a conservation NGO in Tanzania supported by the global wild cat conservation organization Panthera. And the cub whom she adopted was estimated to be only three weeks old at most.

This was incredible. Even though there has been a case of a puma adopting members from its own species, this inter-species adoption is completely unprecedented. Nosikitok has recently given birth to her second litter and this’s likely the most significant factor contributing to her decision.

“She is physiologically primed to take care of baby cats and the little leopard fits the bill,” says Luke Hunter, Panthera’s president and chief conservation officer.

It is thought that the mother lion gave birth about one month earlier, but her cubs were nowhere to be found. It’s unsure but quite possible that Nosikitok has lost her cub, and she found the leopard cub in her bereaved state. In terms of the leopard, it was almost the same age as the lioness’ cubs, and physically very similar, indeed. Maybe the maternal instinct, in the combination with her mental state has driven her to take care of it.

However, even if Nosikitok continues to foster the cub, its future is still in a veil. Lions have a wide and complicated network of social relationships. They distinguish each other by smell, sight and roar, and are all well-equipped to do that. If the Nosikitok’s pride finds the cub, that will likely be the end for it.

People are fascinated to see the outcome of this extraordinary event. Whether the cub will survive to adulthood, or whether it will fit in to become a lion.

After all, this is highly unlikely that the cub will grow up behaving like a lion. Even with early exposure to the new society, it cannot erase the million-year instinct ingrained in the leopard to become a solitary hunter. Leopard was born to be alone predator at the apex of the food chain, so it will likely go on its own way.